The Singapore Botanic Gardens a UNESCO World Heritage Site covering 82 hectares with more than 150 years of important history was a relatively short walk from our hotel The Shangri la. Some steep uphills made the going slow in the relentless heat as we weaved through suburban streets. Thankfully Long-sufferings excellent sense of direction and map reading skills took us straight to the entrance gates with ease if not coolness. There is no charge for visiting these gardens, although donations are always welcome.

National Orchid Garden – We started here and wow a riot of colour at every turn. Over 1000 species and 2000 hybrids on beautiful inventive displays from ground level to head height and beyond. Orchids tumbled over arches and arbours, hung from tree hosts and surrounded seats waterfalls and fountains. 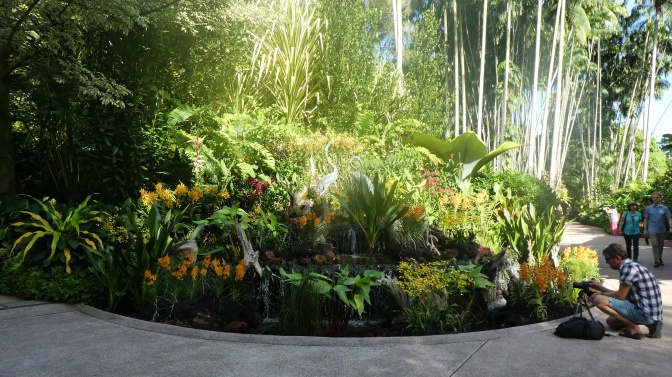 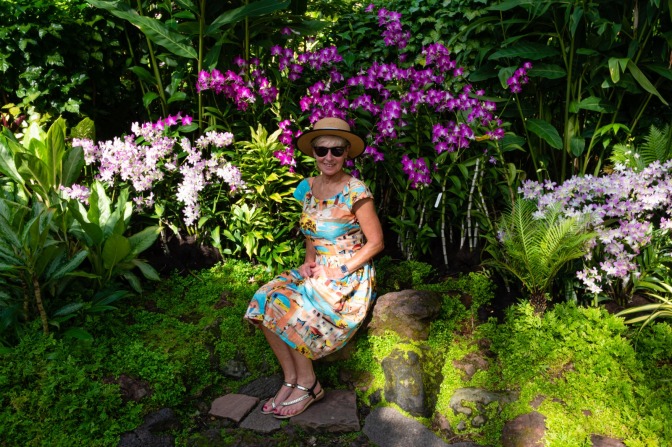 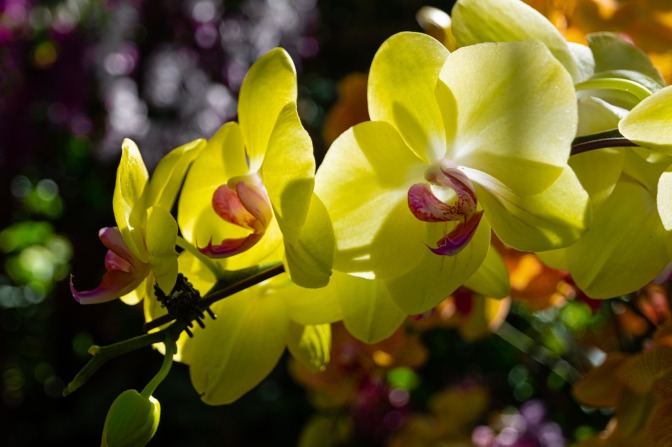 For me just walking outside among these fascinating flowers rather than undercover in temperature controlled environments was the icing on the cake.

Swan Lake – so named much later after a pair of mute swans took residence – was constructed in 1866 and is considered to be the oldest ornamental water feature in Singapore. Almost 1.5 hectares in size with a depth of 4 metres it amply supports numerous species of aquatic plants and fish.

Bandstand on Lawrence Niven’s parade ground surrounded by a ring of yellow rain trees  – Samanea saman. These trees sport light green foliage, due to a mutation yellow leaves were produced on some trees, they have since been cloned producing the now complete yellow ring making for perfect photo opportunities. 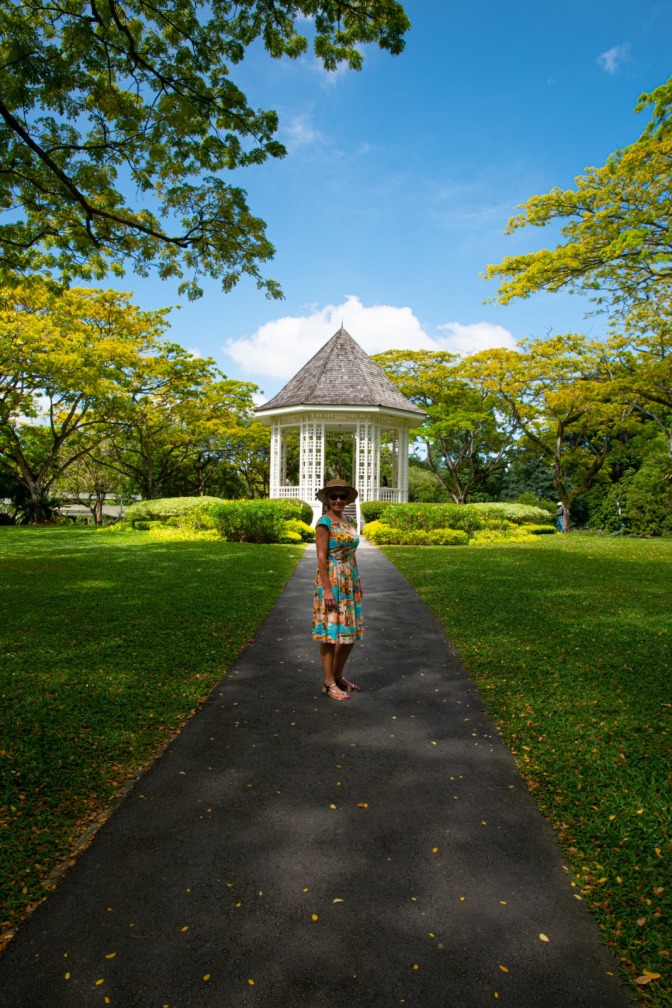 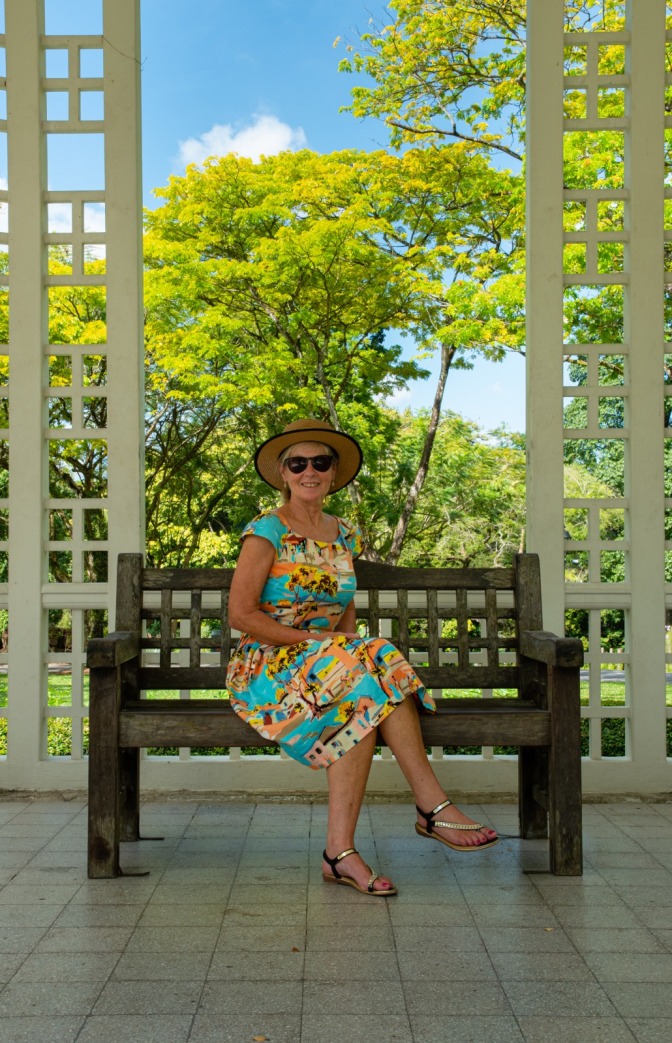 The Ginger Garden – a token 5 dollar entry fee here but well worth it. Hundreds of species of ginger and other plants from related families are planted here in this one hectare area. A path meanders around the gardens incorporating a walk behind a waterfall and a bridge over a pool covered with giant Amazon water lilies.

We walked, we sat and gazed endlessly at beautiful sculpture some so energetic as to almost be real. 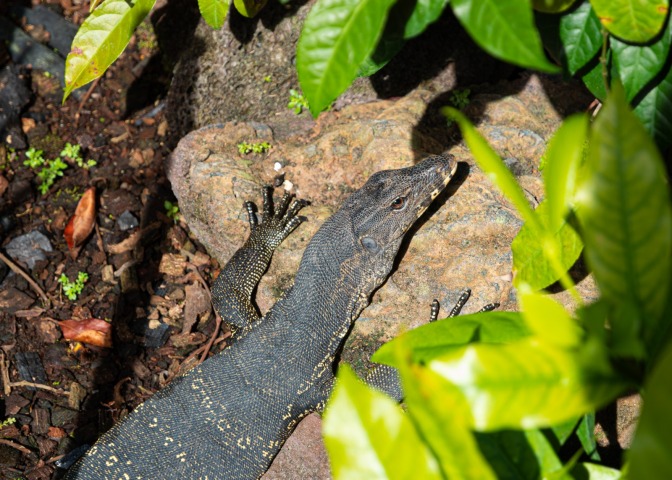 Water features from the small to the large our eyes trying to focus on dragonflies as they darted gracefully at speed over the surface before coming into land on the lush vegetation. The muse behind the lens for a change tried her best and succeeded in capturing their pause.

The gardens were a real treat and beautifully laid out, I could easily have spent two days here surrounded as I was in the lushness and flora away from the bustle of the city, still visible at times a glimpse of skyscrapers….

Hot and foot sore we left for the mostly downhill walk back to our hotel and the coolish waters of  the pool.

Gardens by the Bay Supertrees Grove Skyway – we had toured the rest of the gardens a previous day and night the skyway was closed due to bad weather on those occasions. Singapore pre coronavirus Part 1 Now it had reopened, the attraction should not have caused too much leg wobbling for Long-sufferings fear of heights having only a few days previously climbed Sydney Harbour bridge the ultimate test for anyone’s fears! 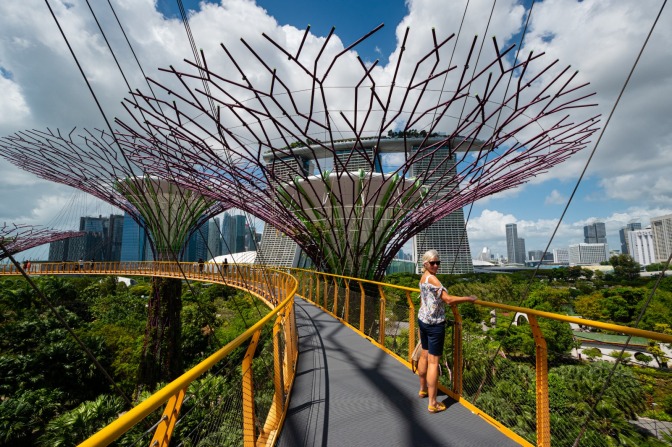 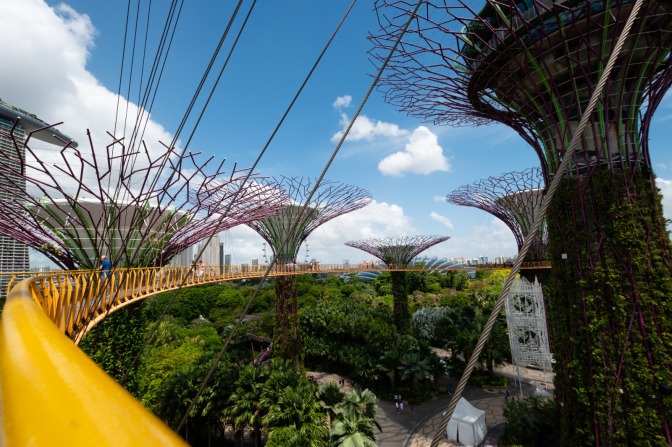 But no his alter ego – the man behind the lens – still had legs that at intervals threatened to give way,  luckily the muse was ready to pose and get behind the lens to distract him. A view out towards the huge Marina Bay Sands Hotel and viewing platform we intended to visit….more heights to endure!

Marina Bay Sands Hotel – views out from the platform across the bay, the now static Singapore Flyer, out to sea and the many moored ships – a sign of the downturn in Singapore’s economy. Over Gardens by the Bay – the snail like structures of the biomes and Supertrees Grove. 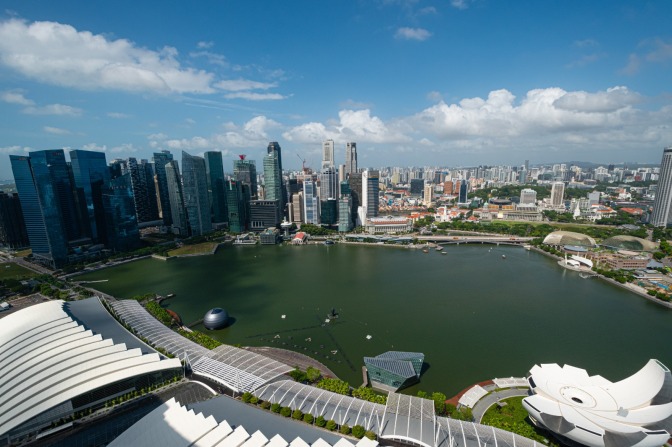 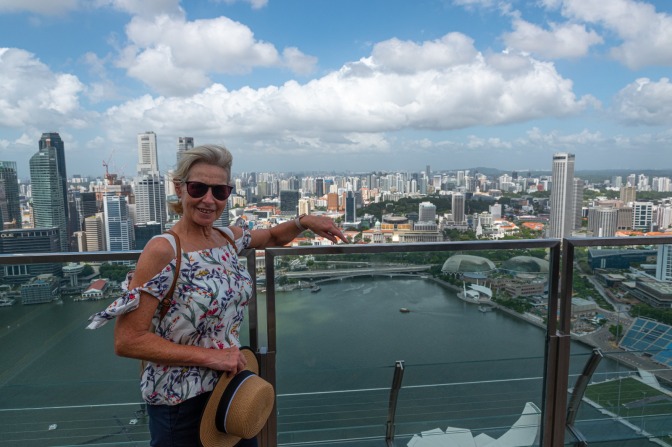 Our time in Singapore was coming to an end just time for an early evening taxi ride out to the famous Raffles Hotel, our driver drove right up to the entrance where a waiting footman opened the door. I tried to elegantly alight from the car as he offered me his gloved hand, the left leg weary now after three months of travelling meant I failed miserably! Upright once more a photo to say we had been to Raffles Hotel, well outside anyway!