New Zealand has tempted us back for a second time. It would seem that almost as soon as our return home almost three years ago from “our once in a lifetime trip” the long-suffering was secretly toying with the idea of a return.

Never one to plan by halves he has more than doubled our time touring round in a motor home….nine weeks in total. The seasons will be different, early spring to mid summer, packing this time has been challenging to say the least with the extra layers needed to keep warm. Oh and after nine weeks touring we will continue on to three more destinations……in another life he must have been a travel agent/guide

This Road trip will start from Christchurch on the South Island to Auckland on the North Island a reverse of our previous trip. Our drive will take a different route for the most part although some previous destinations will see us revisit. Again the long- suffering has his brilliant, necessary itinerary however, the extra time factor gives me scope to take us off piste whenever the opportunity should arise!

For long-suffering my ongoing hip issues do give him some relief in our style of flight out. Not for us cramped legs, instead we upgraded to enable me on reaching New Zealand to walk off the plane relatively upright and limp free!

Singapore airlines – I can only comment from an upgraded perspective, worth the extra pennies…..for me emphatically yes. Comfort, food, service were as good as they could be grabbed as we were in the body of a huge Airbus A380-800 for hours on end!

Unfortunately my insomniac tendencies meant sleeping still evaded me for almost the whole flight. I merely tossed and turned exasperated as long-suffering slept peacefully in the intervening periods between movie-time, meals on wheels and losing his wallet…….

In his pyjamas carrying his folded up day clothes the wallet had fallen out of his jeans pocket onto the isle floor en route to the toilet. Unaware and happy back in his luxury seat, waiting for landing in Singapore, a tap on the shoulder by a member of cabin crew soon had him frowning instead.

‘Hello Mr Mower are you missing something?’  Big smile with his reply ‘Erm Breakfast!’ Tentative reply from cabin crew ‘Well yes…..but maybe something else?’ There followed a confused look and then his face visibly paled as it suddenly dawned on him the familiar lump of his wallet under his backside was missing!

Luckily all was well as a fellow passenger found the wallet before it was kicked beneath a seat, hidden until we had left that plane and were up the air in another to complete our flight to Christchurch NZ…our minds especially my sleep deprived one were working overtime in parallel scenarios of a more stressful ending!

After reaching Christchurch and our hotel without any further mishaps, it was time to explore the city centre. We took the hop on hop off tram to see what changes in and around Cathedral square since our last time here.

More buildings had been rebuilt, the Restart Mall was no more instead the shops there had moved across the road to a brand new mall. A huge new library next door to our hotel overlooked the old cathedral, still in part ruins, however it would seem eventually once the funding is in place this beautiful building will be functional again.

The afternoon was warm and sunny enabling us to sit outside a bar with a couple of cold refreshing local beers, before heading across the road to the Art Gallery.  Finally fatigue set in and it was back to the hotel for some much needed sleep. 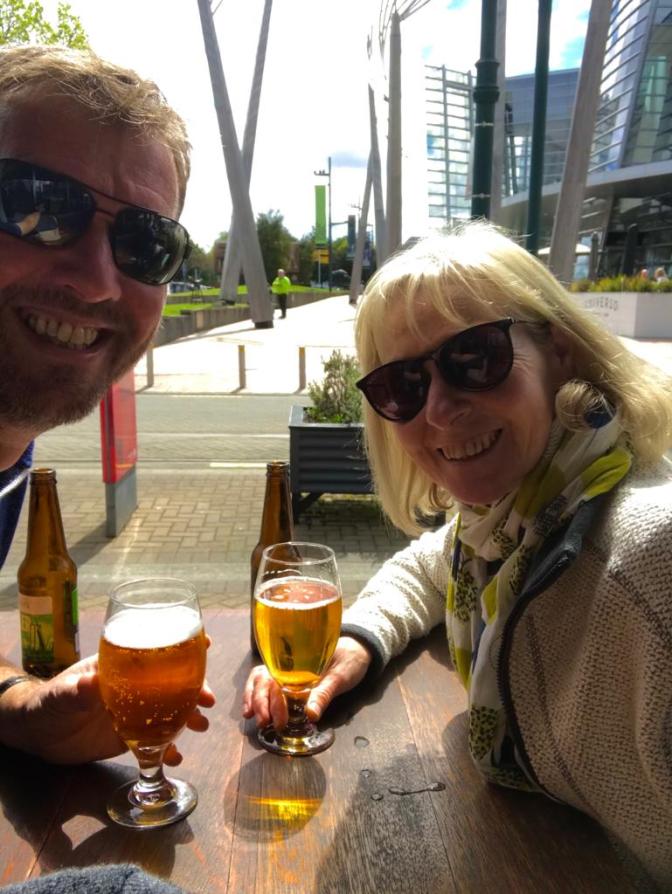