I thought it may be helpful to post an update on the inherited carpet moth problem that became apparent months after moving in to our new house. Read my post Tiny & Insignificant I think not!

Before we started the gradual task of redecorating room by room, action against this unwelcome pest was taken in the form of a carpet spray obtained by the Long-suffering via the internet. More used to consulting trip advisor for the next holiday he settled down to the time consuming task of finding a DIY product for possible eradication success without calling in the professionals.

A few days later his choice of exterminator arrived at our door…..

Simply spray around all the edges of the carpet and under little moved furniture. Repeat in three months…….

After six months of treatment followed by a further wait of three months, our ageing be-speckled eyes could not detect any sign of moths or their tell tale casings resembling a grain of rice. See below…

And so it was with trepidation after redecorating the worst affected rooms, old carpet was removed and new carpet was fitted. Our choice has not included pure new wool as natural fibres are the Moths version of caviar. Instead all replacement carpet is made up of synthetic fibres to help as a deterrent.

A further deterrent – downstairs with the exception of the lounge – are hard floors. The previously carpeted dining room is now back to its original uncovered state. Imagine my delight at finding good solid floorboards, under the part eaten carpet. After a gentle sand and wax the boards now look beautiful, any imperfections only adding to their charm. 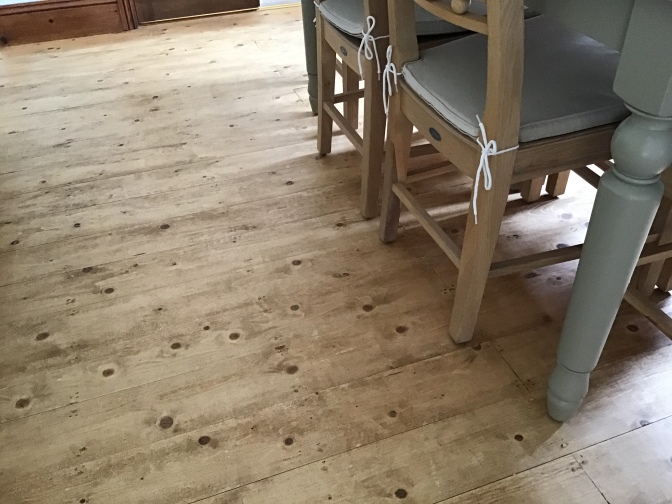 Almost two years later I can report, there has not been any reoccurrence of the dreaded carpet moth in any of the carpeted rooms.

Not all rooms are sporting new carpet, two upstairs are still waiting for the long-sufferings excellent decorating skills, the originals still remain underfoot with their edges in tatters, however new activity has not been noticed and we are both vigilant at regular checking and hoovering everywhere!

I am quietly hopeful that after this drastic treatment – the product, according to the label is highly toxic if not used and disposed of correctly – and by following recommended best practice going forward ie. regular cleaning, especially edges and dark, hard to get to places specifically under heavy furniture, beds etc. has eradicated this destructive pest for good.

Meanwhile for someone who tries to garden organically outside, our use inside of this product with all its warnings does not sit well with me. Therefore, I have engaged in research of my own and am delighted to find a range of more organic products readily available on-line, most with favourable reviews.

This is the direction the long-suffering will be pointed too should this particular pest arise once more!