I started to write this post as Cyclone Debbie hit the Whitsundays from notes made of our time there, now seven weeks ago. At first I pondered whether to post at all for fear of seeming distanced from the very real suffering of those caught up in the aftermath of this devastating force of nature.

However, time has moved on tourism will be as important to help with the rebuilding of livelihoods, one such ‘Whitsunday Getaways’ our tour of choice. Their two catamarans survived the storm and they fairly quickly got up and running again. This our experience with them in this beautiful part of Australia………..

Day 1 – Back on long-sufferings planned itinerary we set sail – for a while at least – on a sunny late afternoon. Our 43 foot sailing Catamaran named Getaway II with its four comfortable private en-suite berths was everything we hoped. Our fellow sailors comprised – in order of importance – the crew, Chris the skipper who like me was prone to go ‘off itinery’ and Jess the skippers mate – Jack of all trades! And then in no order of importance the guests – one Canadian couple, one Austrian couple on honeymoon and one British couple – other than us. Unfortunately lack of brisk sea breeze eventually saw the sail dropped and the motor fired up as we headed to our first stop for the night – Turtle Bay. A small detail though as we sat out front or laid out on the nets strung between hulls revelling in the sea breeze whipped up as we powered through the deep waters. 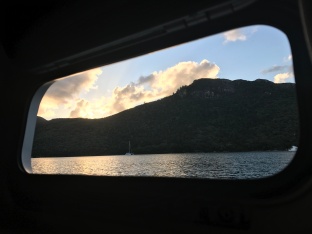 Day 2 – After a good nights sleep – once we got used to the lapping waters and power noise for the air-conditioning – us two early risers rose! We crept up and out through the galley converted into the crews sleeping quarters while the rest of the boat slumbered, crew included.

Up on deck we kept movement to a minimum and only spoke in hushed whispers as we watched the sun rise together, and a threatening rain storm on the horizon. By 7am most of the guests were awake but still no sign of the crew slumbering oblivious in the galley below! Eventually our parched throats were soothed as finally they woke scrambling sheepishly at 7.15am, to much amusement from us and breakfast followed only slighter later than the designated time of 7.30am!

Morning – Whitehaven Beach, 7km stretch of breathtakingly stunning pure white sandy beach and turquoise, blue and green sea. We were each handed a stinger suit to help protect us against any sting rays that may be lurking – common in these seas apparently! Skipper Chris dropped us all off by tender with host Jess as our guide leaving us to walk through native bush and up to the lookout at Tongue Point. The heat & humidity under the thick canopy made for uncomfortable walking causing sweating man to return!

I was having my own sweats – of a different kind – imagining what may lurk above and below my head. With good reason as we encountered resident spiders waiting in huge webs strung between branches and Geckos, so rigid and still, almost to be missed, their skin camouflaging against bark or undergrowth.

Worth the worry and effort? Absolutely! There are few words that can possibly do this beach justice, it really is so beautiful as to be quite mesmerising. The intense brightness of the pure white sand like no other we had seen before and the mix of pure greens, turquoise and blues of the sea was captivating. Looking down onto the beach the people on the sand and in the sea  looked like an army of ants identically dressed in their black stinger suits. The tide was in, but on its way out, we were advised to come back up later when as the water retreated the sand swirls would be exposed. 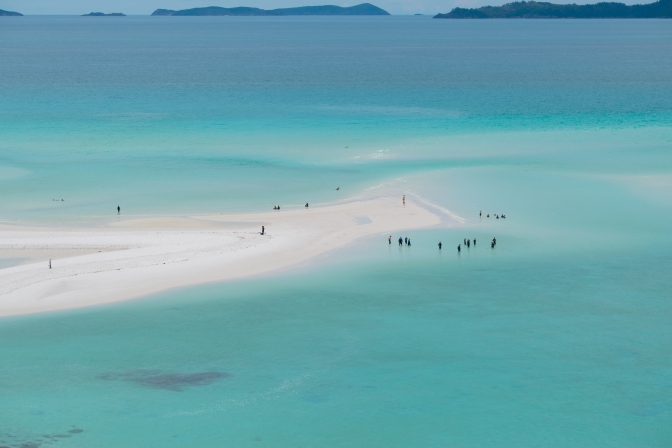 Walking partway back the same route we then took the descent track down eventually opening out to experience for ourselves this amazingly beautiful beach. Bathing in our stinger suits – long-suffering looking like the man from the ‘lady loves milk tray’ advert – in clear warm waters and as the water retreated we felt marooned on the emerging sand bars.

The soft 98 per cent pure white silica sand, we used to polish our jewellery -yes it really does work – our wedding rings sparkled like new!

Some of us did in the heat of the day make it back up the steep track for a second photo opportunity and yes it was worth it especially for long-sufferings ever increasing portfolio of instant memories. 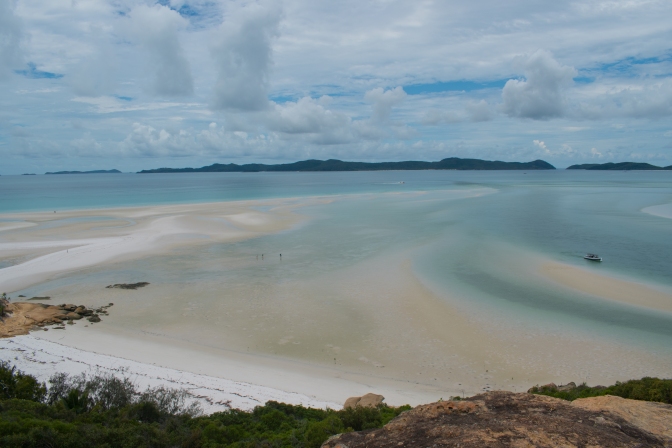 After a light lunch on board we sailed to Pitstop Bay for an afternoon of Snorkelling. Fish swimming in all directions, beautiful corals, it was like swimming in a huge aquarium. 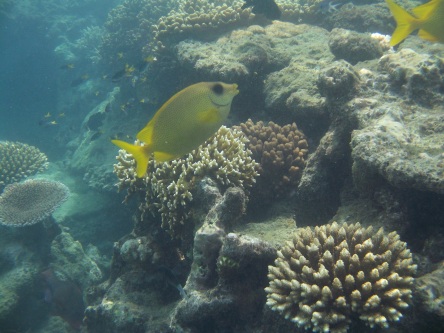 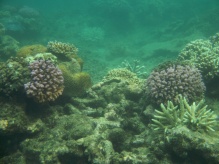 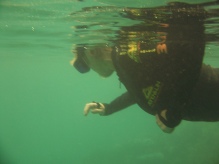 Over the course of the next two days we had the opportunity for more snorkelling in Mantaray Bay and Butterfly Bay.  The only small disappointment for us was the sea  a little too choppy for the paddle-boards carried on the back. Nevertheless, with good food, great company, beautiful scenery, opportunities to just relax as we sailed – or motored – over the sea and our own exciting moment as we awoke one morning to a lone turtle swimming past our window, we were more than happy! 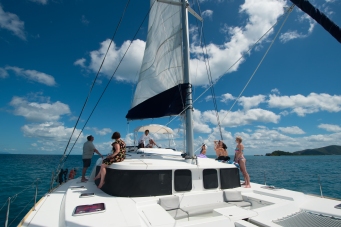 Whitsunday Getaways did not disappoint, from the time we booked months previously to our arrival in Airlie Beach the information and organisation for the trip was faultless. We left on time and returned on time, the boat was comfortable, food good – maybe not the frozen fruit breakfast, but it did raise a smile or two! Thank you Jess! The stinger suits, snorkels and fins in good condition if you don’t have your own.

Chris was a mine of information about the area we sailed and beyond, keeping us entertained throughout with lots of laughs, including his own ‘adopted Island’ found while sailing ‘off itinerary’ aptly named ‘Christo’ what else! 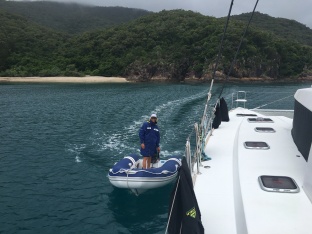 Maybe one day we will return, but for now we wish the Whitsundays much calm after the storm……………..